Years and years ago I got up the courage to develop my own black and white film after reading an article that gave me the very basics in a way that I could understand. That understanding only took place after researching over the period of many months.

I’m experiencing the same thing with glazing. After seeing the results of cone 10 glazing and seeing the depth that it creates I’m ready to take it on.

Cone 6 in oxidation just pales in comparison. It looks as if there is a film of glass on top of some clay. Sure some of it looks good but cone 10 just has something that makes it sing. It’s as if the glaze is a part of the clay itself.

This article from Ceramic Arts Daily, along with John Britt’s excellent books on mid range and high fire glazes just pushed the right buttons for me and I’m ready to go.

I had previously bought chemicals for some cone 6 testing so I have a lot of 2 gallon buckets with a lot of the chemicals I need but cone 10 calls for some specifics. So I’m off to my supplier in a few days to pick up the rest of what I need.

I’ve made up some small pinch pots to test without fear of melting stuff to the kiln shelf. These will also be to test the creation of a black englobe to go along with the buff white clay body I’m using. I want to get 2 complimentary glazes, and with the color of the at body and a black englobe I will have a decent start for decorating and making functional wares with my OWN glazes.

I’m very excited to get some good reliable glazes:

Spring, I find, is a renewal of life and life takes work. Hopefully its the work of living harmoniously with the cycles that it brings, which doesn’t seem much like work, just more like life.

I have a new load of pottery to photograph and some things on the horizon with my friend and instructor, Jay Benzel. 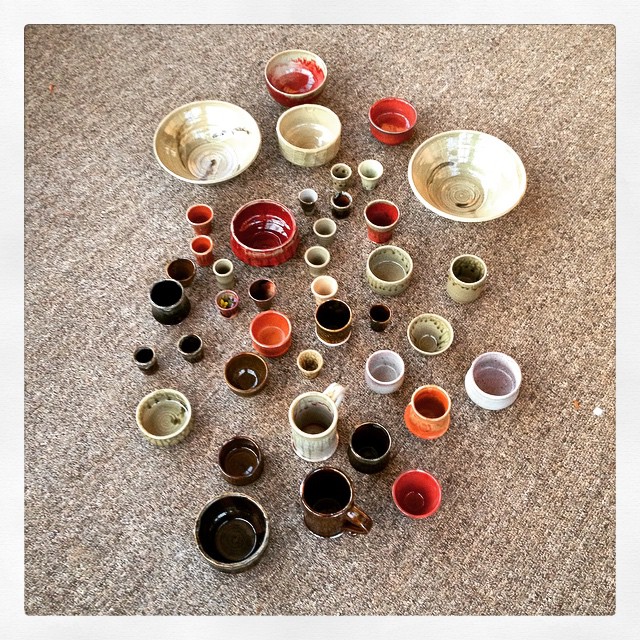 I’m also working with a few people to bring something special to the blog that I hope you will enjoy. The process will take a few weeks but it will be well worth it.

I’m sick in bed still and trying to recover and work out a few other things. Jay told me to think happy thoughts and then sent me a pic of the kiln opening today though so that I can have something to look forward to.  I spy some promising gems in here. Thanks Jay!