On a beautiful rainy Saturday I find myself in a fantastic mood, accomplishing chores around the house and letting things flow as they want.

Today I’m making test tiles and planning more experiments based on the cone 6 accident where the white glaze over iron oxide ended up clear and giving a slight sheen and some tooth to the clay. I have a lot of tiles already but most of the early tests are not to my liking. I’m honing in on my color palate and once I get that down I can better create what it is that is “previsualized” in my head.

(On a side note I’ve been looking for some wooden stands for festival displays and found these for $5 at Family Dollar of all places. its meant as an over the sink shelf. Cant go wrong with that price)

Previsualization is the key to a lot of arts. Photography comes to mind and its where I learned to see the finished outcome before I made my adjustments and pressed the shutter. Ansel Adams was a master of that. What he had in his head he was able to bring out in the darkroom.

Here is how I make my test tiles.  I roll out the clay suppporting the rolling pin between two yardsticks to get a consistent thickness. I then use the same yardstick as a guide to cut the strips and make them 3 inches long.

I line up the cut strips and mark them at 1 1/2″ at each end of the line. Then use the yardstick again to score a bit less than halfway through the group to give a place to bend it at around a 9o degree angle. 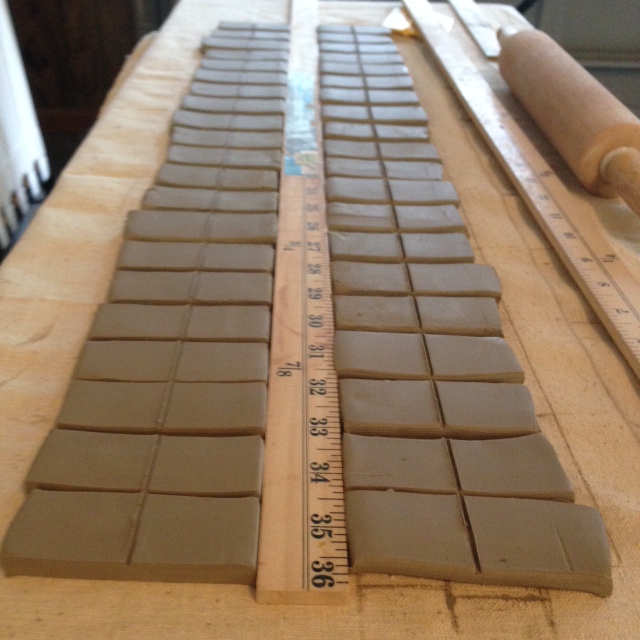 Then from the kitchen or wherever I get something that can give some scoring to the top of the tiles so that I can see how the glaze performs when it pools.

Also I am dipping a few of these into black slip as I am obsessed with the way some of the glazes turn out on a dark body. Yep I’m wearing gloves, this slip is messy!

Finished product drying. The slip covered tiles are not pretty but they’ll get the job done.

Next up I need to do a batch with my red clay. When they are dry I will bisque fire to cone 04. I will keep some of these without glaze and fire to cone 6 so that I can test a few glazes over the iron oxide and black slip. Cone 6 is vitrified so I expect that the tiles wont pick up much of the glaze at all but I might come into something interesting. If its interesting and repeatable I want to continue testing it 🙂

This is the “boring” part of ceramics. The tedious testing and logging but with the occasional surprise that makes you go “Hmmmm… what if I ….”. And also the test tiles that you hate may end up growing on you after a while. Or if not they might spark an idea for another avenue of experimentation.