Lee Love posted a story last night that got me watching some videos about Warren MacKenzie, his pots and his philosophy. One of the points that he made was that a good pot is a communication between the maker and the user. This concept transcends the medium. Pottery has its own language, as does photography or any other art.

I’ve always heard the question: “What do you want to SAY with your art?” I think in starting to get an inkling of what that really means after spending time in a few mediums. 12 years in photography, almost 5 in Hapkido (I do consider it an Art in the way that I use and apply it), and 2 and some change in ceramics.

Each medium has its own language and its own symbolism. Each medium though, accentuates a certain something that you may not be able to put your finger on.

Photography relies on what is around you, and your perception and interpretation of that environment. It lets the viewer respond to what is being said with the photograph. It’s a language conducive to certain types of emotions, some more than others.

Hapkido, the martial art, relies on your mind and body and the manipulation of both yourself and your partner or opponent to come to a conclusion. Ideally that conclusion means no fight at all or at least no lasting damage.

Ceramics relies on form, color and texture. Also, when being used functionally, it adds a vast and completely new language on top of what can already be seen and felt in the hand.

Each language can be loud or soft. Heavy or light. Gesturally dramatic or low key. Sophisticated or ham-fisted. It’s almost like wine, in that the flavors and sensations you pick up are unlike anything that we have a proper names for. Every lover of these arts interprets each word or phrase or taste In a different way. Sometimes it lines up with another taste but more likely it is each person’s perspective on life that draws them to a photograph or to a pot.

In the end, whether the creator was trying deliberately to put some concrete message into a piece of work or just conveying their own personal story, people respond to it. Either through disinterest or a heartfelt connection.The connection is to the maker who can speak his own life’s language through that medium and to a viewer that shares the language of the maker’s life. 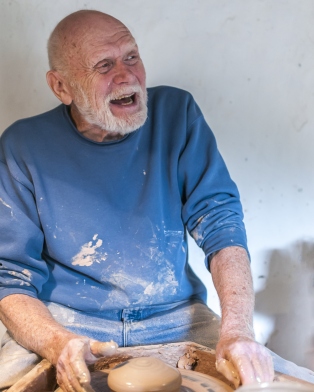 View all posts by Sebastian